Mauni Amavasya is a very special day at Kumbh.  It is the day when people remain silent and experience silence within while they take a dip in Ganga to be in the Grace of all the Yogis who have been on her side.

To know more about the significance of Mauni Amavasya, please listen to Sadhguru.

Management of Kumbh and the Crowds

That day between 3 to 5 crore (30-50 million) devotees took the dip in Ganga.  At Sangam and the various ghats near Sangam.  The devotees were being instructed via loudspeakers and police was managing the number of vehicles entering the city of Prayagraj that day from the night before Mauni Amavasya.  The controls and roadblocks had come up well before 4 pm on Feb 3rd.

Forty-three fire stations, 15 sub-fire stations, 40 fire watchtowers and 96 control watchtowers had been set up.  The ghats were being watched by lifeguards on lifeboats and boats with nets were strolling along the ghats to pick up garlands, flowers, coconuts etc to ensure the water was cleaned up.  Except for the offerings floating around, the water was very clean!  All the pillars on the ghat were not just numbered but also had a pic of an animal or bird for easy identification to let people know where to go.  Announcements kept happening on those who were lost and where the parents or family members should go for reunion.  The entire management was just simply remarkable!

When we reached late at night, one could see streams of devotees walking up to Sangam and the Ghats at just past midnight.  They wanted to reach early and at the time given to them by their Guru (as per the mahurat for their kula/community/family) they were to take the dip.  Old, women, small kids were eagerly walking down with meagre bags and clothes in that cold (was around 3-5 Celsius that night).

When one woke up and checked the flow, many were walking back after the dip at 3.45 AM.  At that time one could see people coming in and going out from the direction of Sangam.

By the 5th Feb morning, most were just walking out of Sangam area and Prayagraj itself.

No one went hungry in Prayagraj in Kumbh

One interesting phenomenon was how many tents were set up by many Ashrams and businesses which were offering prasad (food) for devotees coming and going on that road.  So much food was distributed that day, I was told by the locals, that no one could have gone hungry!  Imagine that!  Los Angeles’ entire population is 4 million.  40 million (10 Los Angeles’ put together!) walked that city that day and no one could have gone hungry because of how people gave voluntarily!

And, this did not happen on just one day.  For the whole month, the Ashrams/businesses freely gave prasad to the devotees coming and going!  It is something that they do out of devotion.  They get the best veggies, the best masalas and prepare the prasad!  Spend hours – in fact the preparation for the food went through the night for the next morning by at least 15-20 people!

When it was time for lunch, the food was ready with thousands of Pooris and two big vessels of Aloo (potato curry).

In this day of materialism and profits and benefits, an ENTIRE town was functioning on the very powerful energy of Devotion.  That is the power of Kumbh!

We created a photo-feature of some of the pictures that we took at Prayagraj and on the way to the Varanasi airport.

Devotees for Sangam with bags on their heads

An old devotee walks purposefully after her dip.

Sharing the Puri-Aloo prasad from Bhandara with the devotees.

80 yr old Devotee on Kalpa-vaas (period stay). Many stay in the tents with rents around Rs 2500-3000/mnth and cook their own food and go for a dip every morning at 5 and spend the day in Sadhana and Puja

Devotees on the way to Sangam

Art work at the Varanasi airport on the way out

Sharing the Puri-Aloo prasad from Bhandara with the devotees.

Flute Vendor on the road to Sangam

Ashoka Pillar at the Varanasi airport

Pillars numbered alongwith animal pics for easy identification of the position and direction. Constant announcements were being made of lost people with clear instructions on where to go!

Sign of the Bathing Ghat in major lndian anguages

Crowds on way to Sangam for Mauni Amavasya dip

Pillars numbered alongwith animal pics for easy identification of the position and direction. Constant announcements were being made of lost people with clear instructions on where to go!

Ambulance came promptly to help a devotee on her way to Sangam Early Morning at 4 AM!

One Guru takes his Disciples to Sangam

Lifeguards were around for any incidents in the waters

Small enclosures for women to change their clothes in their privacy

Vendors on the road to Sangam

Ashoka Pillar at the Varanasi airport

Sponsor of one tent enclosure. Many of the tents in the large acreage near the ghats and Sangam are managed and served by a combination of Ashrams and businesses.

Sponsor of one tent enclosure. Many of the tents in the large acreage near the ghats and Sangam are managed and served by a combination of Ashrams and businesses.

A panoramic view of the ghaat 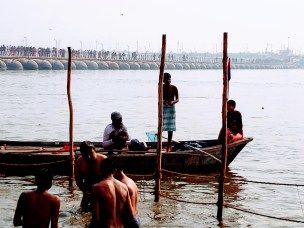 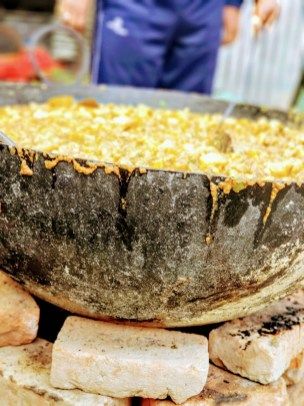 Dum Aloo prasad being cooked for the Bhandara for the devotees 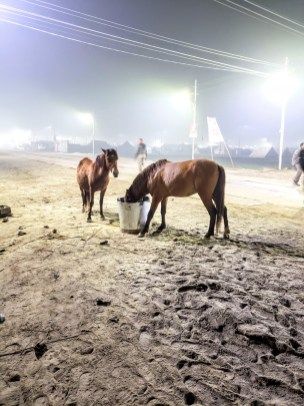 Couple of horses eat up the leftovers 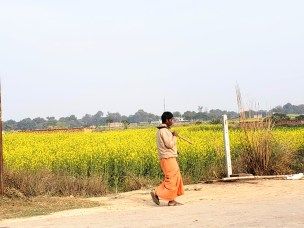 On the Outskirts of Varanasi 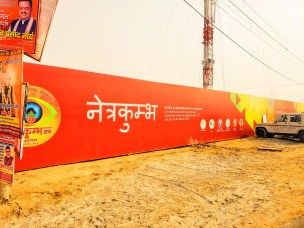