As we speak, there is a very fundamental flaw in India’s Governance. The Head of the Executive branch of this Parliamentary Democracy has never been elected by any one to any constituency by vote. Dr. Manmohan Singh, the Prime Minister of India is not an elected member. He is where he is because of a quirk in the constitution to avert a crisis if there arose one and someone from the nominated members of the “Elder’s House” – the Rajya Sabha – had to step in to handle the situation. What was to be an exception, was made into a rule.

So, now we have a Prime Minister who has never been elected to any Parliamentary seat in the world’s largest Parliamentary Democracy but is the Executive Head simply because he is a nominated member to the Rajya Sabha from a state he has never lived in.

And, he happens to be the most respected of the politicians!

If the line of Integrity starts that low, one wonders how low can it possibly get?

As Benjamin Franklin left the Independence Hall after the second draft of the Constitution, he was stopped by a woman who asked “What manner of Government have you bequeathed us, Sir?” He replied “A republic Ma’am,

if you can keep it

Taufiq Haji Gaffar had been evading arrest for several months by getting anticipatory bails from various courts. Finally, his detention order was issued on August 14, 2001 under COFEPOSA (the Conservation of Foreign Exchange and Prevention of Smuggling Activities Act). His wife approached Delhi High Court. Ram Jethmalani, her advocate defended Taufiq in Delhi High Court is January of 2003.

On April 21st, 2003 P. Chidambaram – who was to later become the Indian Finance Minster on May 22, 2004 – defended the smuggler who had defrauded the exchequer to the tune of Rs 45 crore. (see the screen image at the bottom of this post)

Nalini Chidambaram, Counsel for Kashi Nath Tapuria, on Friday filed a petition before Justice K.J. Sengupta of Calcutta High Court to be added as a party in the probate proceedings of the will of the late Priyambada Birla, wife of the late M.P. Birla. The petition stated that Mr. Tapuria was the executor of the 1982 will of Priyambada Birla and also her brother. The application was supported by the Birlas, but Counsel for the Lodhas asked for filing opposition. The exchange of affidavits will be completed probably by January 15 and the matter will appear on the first available Friday after completion of the exercise.

(Please see the transcript of this video at the bottom of the post).

Kashi Nath Tapuriah, is a Kolkatta businessman, who is an accomplice of Hassan Ali, and a money launderer with links to Hawala traders – used by Terrorists networks from Pakistan. The Enforcement Directorate issued a show cause notice against Ali for acquiring Rs 36,000 crores illegally. Tapuriah shared that he was introduced to Hassan Ali by a “Senior Congress Leader”.

The probe has also thrown up ‘evidence’ against Khan’s associate Kashinath Tapuria, who has said that two politicians, one of them a senior Congressman, had referred Khan to him during his days of financial difficulties.

Notice was also issued against Tapuriah separately as well:

Separately, the department raised a demand of Rs580 crore against Kashinath Tapuriah, a Kolkata-based businessman and alleged accomplice of Khan, and Rs20,000 crore against his wife Chandrika Tapuriah, the official said.

At that time, Kashi Nath Tapuriah was defended by Nalini Chidambaram, the wife of P. Chidambaram. This was when P Chidambaram was the Finance Minister (2008) and both the Income Tax department and the Enforcement Directorate reported directly to him!

A democracy is as good as the people who have it. It is a governance of responsibility. A dumb, ignorant and apathetic population which is either not interested in politics (Governance) or does not have the clarity to see through the issues and the rot – or worse still, does not have the will to fight or stand up for themselves – will soon become a slaved populace.

When one looks at the most fundamental ethics involved in ensuring there is no “conflict of interest”, one doesn’t engage in activities that can conflict with judgment when one assumes a situation where he / she can affect the direction of a probe, rule, law or indictment.

But, here we aren’t even talking about that conflict of interest. In fact, that phrase itself seems completely meaningless. What citizens of India are confronted with are people who have the highest of powers and also have – for money, of course – defended the biggest criminals of the country.

When the Finance Minister and the current Home Minister of the country – and his wife – are defending criminals who have defrauded the country to levels of Rs 40,000 crores, and the Directorate which indicts these criminals ALSO reports to the same person – then it is indeed a surreal situation. While Nalini Chidambaram was defending Tapuriah, P. Chidambaram was the Minister of Finance and the Enforcement Directorate (which reported to him) was the one which was proceeding against Tapuriah.

Witnessing this, isn’t it natural to ask the question – if the entire proceedings are gamed, then why the circus? For, media is in cohoots with these criminals and politicians anyway (More on that in the coming posts).

This brings me to the final point and the thing that outrages me the most – is the issue in India Corruption or Masochistically Apathetic Populace?

For, this level of subversion of a nation is NOT corruption. Surely, someone with the least sense of integrity in the media or the courts or the administration could have pointed out to it?

Ironically, the raped in turn smile and make jokes about how it pains! Apathy cloaked in Humor and sarcasm is a suicidal road.

There may be a cure for pain. But not for suicide.

“When I was in the Income Tax Department as Commissioner, we had raided Hasswan Ali in Pune and his accomplice Kashinath Tapuriah in Calcutta. Mrs Nalini Chidambaram, wife of the Union Finance Minister Chidambaram appeared in the Calcutta High Court on behalf of Kashinath Tapuriah and got him the bail. I don’t know how many hundreds of crores this couple charged from Hassan Ali and Kashinath Tapuriah. How can he (Chidambaram) be in the GOM when he should be behind bars? He has no business to be there even as a Minister in this Government.”

“There has been a fake currency scam in the RBI. The CBI raided the RBI vaults in 2010 August. They found fake currency in the RBI. The Cabinet Secretary briefed the meeting and said it was a small thing. The template for printing was with a man called Roberto Giaoro. What he did … he deliberately minutely altered the template. He was supplying all the fake currency notes to ISI, which were all coming to India at the rate of Rs 50 for every Rs 500 note. In India they are selling the same at Rs 250 for every Rs 500 note and in Nepal they are available at Rs 150 for every Rs 500 note. These two men, (Pranab Mukherjee and Chidambaram) are doing nothing. They are nothing but henchmen of these powers (ISI and other terrorist groups in India and Pakistan)” 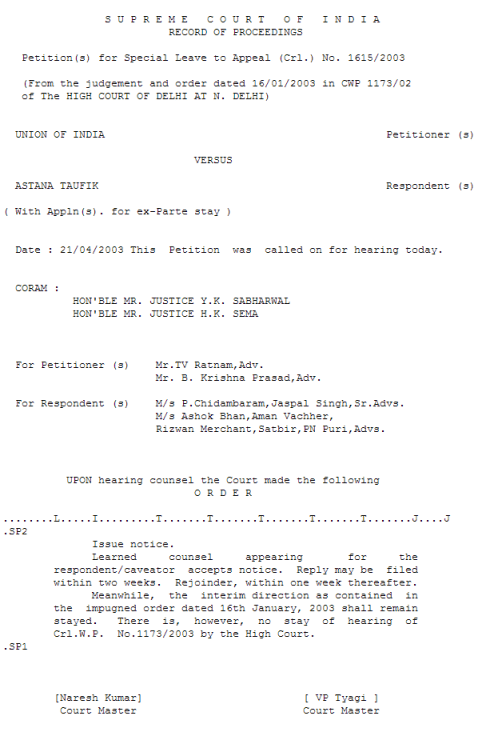