“We are liberals, they are right wing bhakts.”  Have you heard this?

But have you heard the other side call them anything?

In an earlier post titled Liberals’ Rabid Hatred for the NRI I had written about those who call themselves ‘liberals’ and paint everyone whom they want to target – for example in today’s times those who back the current Indian PM – black.  A friend wrote a comment on my Facebook wall where she instructed me to either call such people so-called liberals or qualify the liberals with parenthesis – as ‘liberals’.  She said, and correctly, that she did consider herself as a liberal and feminist.  These people, on the other hand, were really peddling an ideology by abusing others.

Those who call themselves Secular and Liberal have institutionalized dehumanization and subsequent persecution against the Hindus. Lets look deeper... Click To Tweet

In short – there was nothing liberal about the so-called ‘liberals’.

Now let us get back to the extreme urge of those who are in reality, Hinduphobic but peddle themselves as walking some high road, to categorize others.  Why call themselves something and others something else?

If you see you will notice that to distinguish (and better target!!) those whom they consider their ideological adversaries, they start categorizing.

They have neat/nice, well meaning categories for themselves – liberals, progressives, democratic – and they start using religious metaphors (of a specific kind) to categorize others with words that denote backwardness or lack of intelligence.

Legitimizing Hinduphobia and dehumanizing the Hindu

Bhakts is one example.  Bhakti (or devotion) originates from Yoga.  Yoga is non-religious, but since every belief system that came over to India tried to demolish the local culture and ways. [also read Breaking Dharma: Vilification of Bhakt, Bhakti and Guru]

They (invaders and imperialists) categorized the locals as Hindus and rejected as well as attempted to destroy everything about the land and its way.   And, therefore, within that Hindu way of life, Yoga found its only refuge.  So Christianity and Islam by design and deliberate orchestration became opposed to yoga and the Hindu way of life. As had been the case with the Pagan and Native American ways in Europe and the Americas.

Now, therefore, Yoga and Bhakti are only associated with the Indic belief systems (Sikhism, Jainism, Buddhism) but more so with Hinduism with its vast array of Yogic sharing in terms of scriptures.

Those who understand Bhakti in its essence, know that when Bhakti or devotion is practiced in a calculated way it is the work of a scoundrel, not a devotee.  A devotee, you see, has no agenda of his/her own and his only way of being is what or who he is devoted to.  In that sense, no thinking/calculating/negotiating is involved.  Or in some ways you can say that the devotee is blind to all else.

That essence of Bhakti – the central precept of Yoga and Hinduism, is now being legitimized as a pejorative against Hindus themselves!  Hinduism’s most powerful and central precept is being used as a weapon against the Hindus by berating the very meaning of that way of life!

These days, when someone wants to mildly abuse some Hindu, he calls him Bhakt.  When he really wants to abuse, he calls him “Andh-bhakt” (blind devotee).

As much as the complete bankruptcy of the most basic understanding of Bhakti, Yoga and spiritual work is apparent in the use of the word “Bhakt” as a pejorative, a deeper anti-Hindu agenda is clearly visible as well.  And that agenda stands on the shoulder of age-old tool of those who have persecuted the masses – dehumanization.

On February 27, in Godhra, Gujarat; 60 Hindus were burnt alive (men, women, old people, kids) in a train where an entire bogey was set on fire while the Muslim mobs shut down the doors and windows so no one could escape!  Teesta Setalvad, who interestingly became the “champion of Minority Rights” gave a statement to Washington Post where she said.

‘Let us not forget the provocation. These people were not going for a benign assembly. They were indulging in blatant and unlawful mobilisation to build a temple and deliberately provoke the Muslims in India.’  (source)

This was before all hell broke lose in Gujarat in 2002.

Now, read and re-read this statement slowly and carefully many times over with the following pictures in mind. 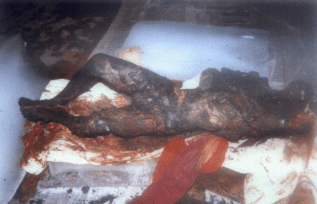 Charred body of a Godhra victim

Charred body of an infant

Charred bodies lying outside the bogie

Once you have watched the bodies of the victims and the dehumanizing response of the most popular “human rights activist” peddling her “moral services” on the subject of riots and minorities, let us analyze her statement.

60 people who were Hindus, were returning from Ayodhya – arguably, one of the holiest place for Hindus – and they were burnt alive by Muslim mobs in the cruelest manner possible.  The doors were sealed off and no one was allowed to come out even when they were burning.  Including infants!

And, this woman stated the following:

So she was implying two things:

This is a classic and the most brutal case of dehumanizing a religious group and then justifying terrible crimes against that group that one can find.  In its evil intent, its core rivals that of the worst of Nazis.

Here is how the process of dehumanization was set up by Teesta Setalvad:

Remember, they had committed absolutely no provocation to anyone in Godhra or Gujarat or anywhere else.  Whatsoever.

But once they were dehumanized, their mere presence was provocation enough.  Every atrocity was righteous.

What so successfully was done with the use of the word ‘karsevaks’, is now also being attempted with the word “bhakt” and “saffron”.

What are the psychological processes that drive dehumanization? The cognitive processes include categorization, imagery, and metaphor. The dehumanized group is classified, not as members of the human species, but as non-human animals.

Even when categories do not define the targeted group as sub-human in any obvious way, characteristics – like low IQ, lacking in morals, regressive, tribal etc – can be assigned to that group by sheer propaganda and repetition.

Once those characteristics have been assigned to that group, it is easy to then define reasons for targeting the larger populations negative feelings – like disgust, fear, anger.

So, when Setalvad called the mere presence in Ayodhya of those devotees as ‘unlawful’, ‘not benign’ and ‘provocative’ – none of them factually correct as based on any action or statement from local government in Ayodhya – she was assigning characteristics to the category of “karsevaks”.

Once these two steps are done:

Then it becomes easy to do whatever kind of violence, persecution or genocide one wants with that group in a righteous manner.

Dehumanizing groups of people produces a kind of emotional Gestalt shift, replacing the respect and compassion that normally go with recognizing people as human, with a different emotional package that applies to threatening subhuman species. Propaganda campaigns were used by the Nazis, Hutus, and other aggressive parties to bring about this kind of emotional shift.

The process of dehumanizing Hindus in general and those who are or appear religious is widespread.  Even in Bollywood movies and how literature is written.  Listen to Sudhanshu Trivedi in this discussion as he explains very well.

And, Sudhanshu Trivedi is not off the mark, although he is saying from his personal opinion.

When Persecution is pursued righteously

If I say Jesus was a fake and his god false, I will very easily be called communal and being intolerant.  But, the Christian creed includes the belief that – Jesus is the only true son of God, and his father the only true god.  All other gods, specifically those of “idolaters” (categorization / dehumanizing process) are false.  Now, a Christian has only to say that he should have the freedom to “follow his faith”.  That is all just fine and legitimate.

Worse, if you point out the obvious intolerance in a Christian’s stand, you are in turn called communal yet again.

So, what is the trick?

Institutionalize intolerance and aggression on other as path of the central tenets of your “faith” or belief.  After that, all you have to do is “follow your faith”.  No matter how many cruel things it allows you to do.  Even lay barren entire continents of its original inhabitants.

The same process is followed by Islam.  Exactly same.  Intolerance, hatred, and aggression for and towards the  other is institutionalized.  Now, all they have to do to attack you is to “follow their faith”.  Any attempt to call out the real game will instantly be called Islamophobia and communal.

that have been used against the Greek philosophers, Pagans (another pejorative), Native Americans, Aborigines of Australia and NZ, as well as pre-Islamic Arab tribes.

Institutionalized Dehumanization and Persecution needs to be battled at that level

The categorization and dehumanization are institutional scale strategies.  They pave way for institutional level persecution.  The way it was done to RSS.  The way Narendra Modi was persecuted by Media, NGOs, Government and by foreign authorities without even bothering to explain anything.  Demonization of Modi was enough specifically when done at such a huge level.

But what is intriguing is the response of the Hindus to Teesta Setalvad’s demonization.  Ashok Chowgule, president of the Vishwa Hindu Parishad, Maharashtra region – proudly countered her by saying:

‘if this provocation argument has to be accepted, then we have to accept that the terrorist attacks of September 11 on the USA was entirely justified because the terrorists have said that they have been provoked by the policy of the USA’.

He was arguing at the tactical level trying to do whataboutery.  She was roasting such mindsets at strategic and institutional level.  She won.

Biggest lesson – you cannot fight an institutional level battle by rearranging the deck of the Titanic.  You need to handle the Titanic itself.

Hindus, and those who hold spirituality dear, need to look at this entire game of dehumanization plus demonization followed by self righteous persecution.  And, craft a response at that level.  This counters by whataboutery will not do.